Home-made müsli with pecans and dates

As many of you no doubt know I have hitherto not been known for my prowess in food blogging (although I CAN cook – honest!) but as it happened I posted a pic of my freshly-made müsli on Instagram today (because that’s what you’re supposed to do with food, right?) and a few people asked for the recipe. 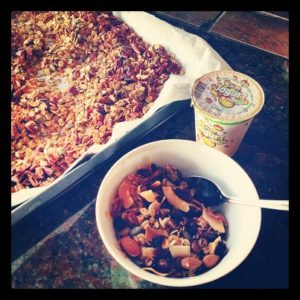 I am completely addicted to müsli and have it for breakfast almost every day. I always make my own and I haven’t had the store-bought stuff literally for over a decade, unless I’m travelling or something. For years I made a very basic recipe, adding my own variations depending on my mood – raisins, almonds, dates, dried cranberries etc. – but a few months ago I came across this delectable concoction and since then I’ve been completely hooked. These days I normally mix them together and top with organic yogurt or plain AB Mjólk (a sort of buttermilk with live culture), to which I may add a dash of maple syrup.

And so, without further ado, my super-yummy müsli recipe:

Combine oats, pecans (roughly chopped), pumpkin seeds, dates and salt in a bowl. Melt butter in a saucepan and add honey and olive oil. Pour over oat mixture and stir with a fork until well combined. Place on parchment paper and bake in a 150°C oven for 20-30 minutes or until the mixture is starting to turn golden. Stir once or twice.

I actually tend to chop the dates and leave them out of the mix until the other stuff is about halfway baked because I don’t like them to get too dry. I’ve also simply added them afterwards.

Like I said, I tend to eat this with yogurt or AB Mjólk. Greek yogurt is also really yummy, though the stuff you get here in Iceland tends to be a little too thick for my taste. At the moment I’m also a little obsessed with toasted coconut flakes, which I always throw in, along with almonds (an absolute must) and raisins.