In which things with Zuckerberg turn a little sour

When I first signed up for Facebook, I was delighted by what it offered me. During the course of my life I’d lived in so many places and made so many friends that I couldn’t possibly keep up with everyone via traditional email [to say nothing of snail mail]. But with Facebook, I had them all in one place, so to speak. Their pictures, thoughts and various goings-on showed up in my news feed and it was great to be able to see what they were up to. Sure, I knew that in return I had to hand over to Mark Zuckerberg various bits of info about myself – my age, where I lived, my likes and dislikes – but that didn’t bother me one bit. After all, I’ve been around long enough to know that there’s no free lunch: I was using a great service free of charge, and it was easy enough to ignore the perimenopausal ads that kept popping up in the sidebar. I thought it was a pretty fair deal. 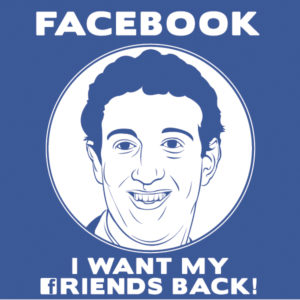 Cut to a few months ago, when news started to trickle down about what Facebook’s new “sponsored posts” really meant. I confess: I wasn’t really paying attention. All I knew was that FB was inviting me to pay money for my page posts to be broadcast to a larger audience, whatever that meant. Moreover I knew that, just like with the sidebar ads, I was a hopeless target. Sure, I wanted my page followers to see my posts, but to pay money for a whole lot of other people to see them? Pffft. Why would I want to do that?

And then I read this article. And then this one. In particular, this caught my attention:

Many of us managing Facebook fan pages have noticed something strange over the last year: how our reach has gotten increasingly ineffective. How the messages we post seem to get fewer clicks, how each message is seen by only a fraction of our total “fans.”

It’s no conspiracy. Facebook acknowledged it as recently as last week: messages now reach, on average, just 15 percent of an account’s fans. In a wonderful coincidence, Facebook has rolled out a solution for this problem: Pay them for better access.

As their advertising head, Gokul Rajaram, explained, if you want to speak to the other 80 to 85 percent of people who signed up to hear from you, “sponsoring posts is important.”

In other words, through “Sponsored Stories,” brands, agencies and artists are now charged to reach their own fans—the whole reason for having a page—because those pages have suddenly stopped working.

Yep. I’d noticed it, too. On some posts, the reach was just a hundred or so people, even though nearly 4,000 had signed on to receive the updates from my page. Indeed, it did seem like some omniscient god of cyberspace was fiddling with my algorithms – but I dismissed it as something beyond the scope of my comprehension. [Clearly I haven’t been around long enough to know that this almost always gets me into trouble.]

Well, it turns out it’s not an omniscient god at all. It’s just stupid old Facebook trying to ramp up its business model now that it’s a publicly-traded entity.

But the reach thing. I don’t know, people. You work hard, creating original content, curating content, responding to comments and messages, taking part in the conversation, building a following, investing your energy, all of which can be incredibly rewarding … and then you suddenly realize that Big Brother is actually pulling all the strings, undermining all that good work. Unless you’re willing to pony up some dough to make him happy. For a while. Until the next time.

It’s f*cking infuriating, that’s what it is. It’s also more than a little scary.

So all of this, combined with a few other things, has really given me pause as far as Facebook is concerned. I guess you could say that cracks have started to form in our hitherto happy union. For the last couple of years I have preferred it to blogging for various reasons, but that may be about to change. And so, I am taking stock of the situation, contemplating how to proceed.