A few days ago I noticed that my Ficus Benjamina had started to sprout tender new leaves. 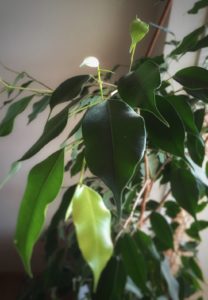 It always happens around this time, and it never ceases to amaze me that during the darkest time of the year here in Iceland, when daylight is considered a luxury, these brand-new shoots of life should spring forth. Just when you would think their natural tendency was to go into hibernation mode and just … shut down.

And then I am reminded that humans, too, renew ourselves during times of repose.

Once I thought that, in order to grow, I had to work relentlessly to make it happen. I thought that if I wasn’t putting in the effort then nothing would change. I wouldn’t change. And I wanted desperately to change because I had an awful malaise on the inside.

I worked and worked, fought and fought, struggled and struggled. And amazingly, I didn’t get very far. All that effort I was putting in, and things still weren’t turning out the way I wanted them to. So I tried harder, but all that did was make me feel worse. I was exhausted, spiritually, mentally and physically (all that emotional upheaval took its toll on my body, too).

Then someone suggested I stop. Just … STOP. Stop trying so hard.

And amazing things happened. I realized that by letting go of the thought that only I could make things happen … they happened. All I needed to do was stop. To rest. I needed repose.

And in that repose, I started to grow.