So the world did not come to an end [although apparently there is still a chance for the apocalypse], and now a whole year of possibilities stretches before us, blank as an unpainted canvas. It feels like a new beginning, even though the whole construct of time is just that – a construct. Minutes, hours, days, years … arbitrary concepts that man has created, dividing the passage of time into measurable units, a construct of the Industrial Age that allowed the barons of industry to control the work force. 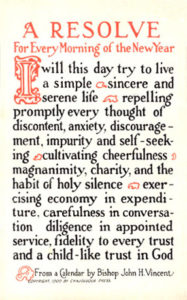 It’s a time when people make resolutions – to stop smoking, to lose weight, to drink less, to spend more time with the family, to be more this, to be less that … in short, to focus on an area in their lives in which they feel they are defective, or lacking.

Personally I dislike resolutions. Profoundly. For that very reason: they focus on our flaws. They focus on the things in which we feel we come up short, and need to be MORE OF or LESS OF. They focus on what we AREN’T. And the method we plan to use to change is always the same: to achieve our resolutions through willpower. The power of our own will.

In my experience, this notion is fundamentally flawed. Focusing on my own shortcomings and then planning to change them through the power of my own will has never worked for me. Never. At best, it lasted for a week or two, and then I was instantly back to my old ways. I used to smoke, and I made countless New Year’s resolutions to stop. They never worked. I did the same with drinking and losing weight. Ditto.

They didn’t work because I was waging war on myself. I was focusing on my own defects, and beating myself up about them, and telling myself I had to change them because they were bad, and feeling ashamed that I hadn’t been able to so far. The problem is that what you focus on, grows. I focused on my defects and shortcomings, and they only became stronger.

Also, flaws and shortcomings do not respond well to harsh regimens and self-denial – to the power of will – any more than a wayward child responds well to abusive words and beatings. If anything, it just makes them more wayward and stubborn.

It took me a long time to realize that the only way to change was to stop being so damn hard on myself, so perfectionistic, and start treating myself with love and kindness. I had to stop demanding things of myself, again and again, that I had demonstratively proven that I was not able to change on my own, through my own willpower. Because willpower is overrated. It really is. It’s like that harsh parent that sets rules and has unreasonable standards and then exerts punishment if they are not met. It’s soul-crushing.

For me, in terms of New Year’s resolutions, this has meant changing resolutions into goals. In my view these two are fundamentally different. Resolutions focus on shortcomings and exerting willpower. Goals focus on the goal itself and coaxing yourself towards it, like a coach would, or a loving parent. It also means praising yourself when you make headway, and giving yourself a break if you don’t reach whatever goal, or stages of the goal, you have set for yourself.

Of course these two different approaches – the gentle approach and the willpower approach – are two facets of a much larger phenomenon. Our society is excessively focused on willpower – on exerting strength and power to get what we want. It is built into the infrastructure of our lives – that to succeed, we have to have willpower. We have to do more, be more. It is the archetypical masculine force upon which our society is built. So it makes absolute perfect sense that most of us should try – at least at the outset – to manage our lives that way. But I believe that a shift is happening. We are coming to see that this masculine thrust, this system based solely upon power and force of will, has failed, or is failing. We need look no further than the recent collapse of the free market system.

So yes. We need a new approach, a different approach, a gentler approach. An approach based upon sustainability and common sense, which many of us associate with the archetypal feminine. And it’s happening. In so many ways, in the big picture and the smaller picture, all over the world.

But that, as they say, is a subject for another post.