For six years I wrote a blog called The Iceland Weather Report. It became fairly well known, particularly in the wake of the Icelandic Economic Meltdown, when it was one of the few sources of news and commentary out of Iceland in English. 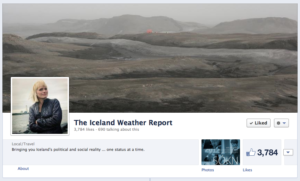 When I stopped updating it in 2010 I decided to move the IWR to a Facebook page, mostly because I didn’t want to lose contact with some of the people who had become “regulars”. I thought it would just exist there in some minimal form, but in actual fact it has kept growing and developing. The page allows for certain things the blog did not (and vice-versa, of course) and the community certainly has not diminished. Today I post news and commentary about Iceland on the page, and there are often some very lively discussions in those threads.