On the Icelandic prime minister and his wife's offshore activities

I expect that, by now, many of you have heard about the scandal rocking Icelandic politics, that of our Prime Minister’s wife, Anna Sigurlaug Pálsdóttir, having an offshore company registered in Tortola – a notorious tax haven. Something that the PM, Sigmundur Davíð Gunnlaugsson, conveniently neglected to mention to us, the serfs of this land, despite having had to declare any conflict of interest he might have when he took office. 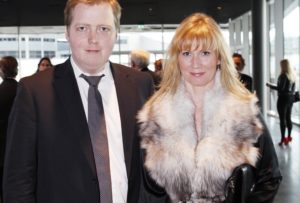 Allegedly said company and its accompanying bank account were created as a depository for Anna Sigurlaug’s family inheritance at the behest of an advisor at Landsbanki bank. Her father sold the Icelandic Toyota dealership a few years ago and made a sh*tload of dosh off the sale, part of which he passed on to her, making her into Iceland’s youngest billionaire. The account was initially registered to both the PM and his wife, but when they decided to marry in 2010 they decided it would be more prudent to create a pre-nup and “separate their finances”. At which the PM supposedly sold his share in the company to his wife for a dollar.

Now, the PM’s wife apparently did not just wake up one day and think “this would be a good day to tell the Icelandic nation about my offshore company”. Nope – the monumental announcement seems to have been instigated by questions Anna Sigurlaug received from an investigative journalist, Jóhannes Kr. Kristjánsson, who is currently working with investigative journos and media from several countries on exposing assets that world leaders and other influential people have stashed away in tax havens. Anna Sigurlaug did not mention this fact in her announcement – which, incidentally, was in the form of a Facebook status. It only came to light later.

So, what exactly are the implications of this?

You may want to get comfortable, maybe grab a drink … because this is gonna take a while.

You see, what also surfaced in the wake of this new information is that Anna Sigurlaug is a creditor of the collapsed Icelandic banks. Let me explain. When the Icelandic economic meltdown occurred in 2008, the three commercial banks operating in Iceland were nationalised, and subsequently made insolvent. For reasons that I won’t get into here, many foreign parties, including hedge funds, had large deposits in the banks. One of those parties was Anna Sigurlaug, via her offshore company. She had registered claims in the bankrupt estate in the amount of nearly half a billion Icelandic krónur (just over USD 4 million).

Now, just before the banks were made insolvent – indeed, as soon as the government saw that the Icelandic economy was about to tank along with the banks – they implemented emergency measures. These measures included capital controls, which meant that no one could take Icelandic krónur out of the country. The country essentially went into economic lockdown. Had they not done that, the króna would have become worthless within a few days and the Icelandic state would have been bankrupt. Those capital controls are still in place, the reason being that if they were suddenly removed, all the creditors of the collapsed banks would demand their money – and we would have the same situation as in 2008, with the króna plummeting in value with subsequent hyperinflation at best, insolvency at worst.

So this situation with the króna and the capital controls and everything is a major, major headache for Icelandic authorities – irrespective of which party they belong to. They will eventually have to be lifted, but how to do it? That’s the billion króna question.

Which brings me to the current government and their election promises before the last elections. When the PM was campaigning, his main election promise, and indeed THE promise that single-handedly led to his Progressive Party getting elected, was that he would offer debt relief to homeowners whose mortgages had skyrocketed in the meltdown. When questioned as to where the funds for this would come from (the cost was estimated at ISK 300 billion) his response was that he would negotiate a deal with the creditors of the collapsed banks, which he called hrægammasjóðir – “vulture funds” – a derogatory Icelandic term for hedge funds. He would let them take their money out of the country if they paid a hefty tax, which would offset the damage to the króna AND finance the debt relief package.

To many of us this sounded like wishful thinking at best, since the vulture funds had not even been asked if they agreed to this scheme – but whatever, lots of people bought into it, and the Progressive Party won the elections. Within weeks they had fulfilled, not their main election promise, not the one that had propelled them into office, but a scheme that removed taxes on the elite – most notably the fishing moguls, who are Iceland’s version of Megacorp Inc.

The negotiations with the vulture funds, on the other hand, appeared to have been forgotten – or at least sent down to the very very bottom of the list of priorities.

Then, just when everyone had nearly given up hope on the debt relief package, the PM announced that it was, indeed, forthcoming. Albeit with slight amendments. No negotiations had been entered into with the vultures, in the end – but not to worry! The plebs would get their debt relief, only it was a much smaller package than envisioned (ISK 80 billion) and it would be funded by … um, well … the taxpayers. Including the people who did not own homes and would not be getting any debt relief. Including the young people of this country. Including the old and infirm. But the promise was fulfilled! – And the government proceeded to congratulate itself profusely on its fantastic successes in the field of debt relief.

Okay. Now back to the vultures. They haven’t gone away, of course. They’re still hovering around going bitch better have my money. And the government still needs to negotiate a deal with them so they don’t ruin our fragile little economy with its dud of a currency when they withdraw their funds. Of course in these negotiations it is the government’s job to land the best deal possible on behalf of its clients, who are the Icelandic people. And the government is led by the Prime Minister. And also Minister of Finance Bjarni Benediktsson (more on him momentarily).

But wait! It now turns out that THE PRIME MINISTER’S WIFE IS A VULTURE!

That means that our PM is negotiating with his wife. For a deal that would, if all was done correctly, minimise her profits (and, we have to assume, his – since they live in the same household) and maximize the profits of the Icelandic people. 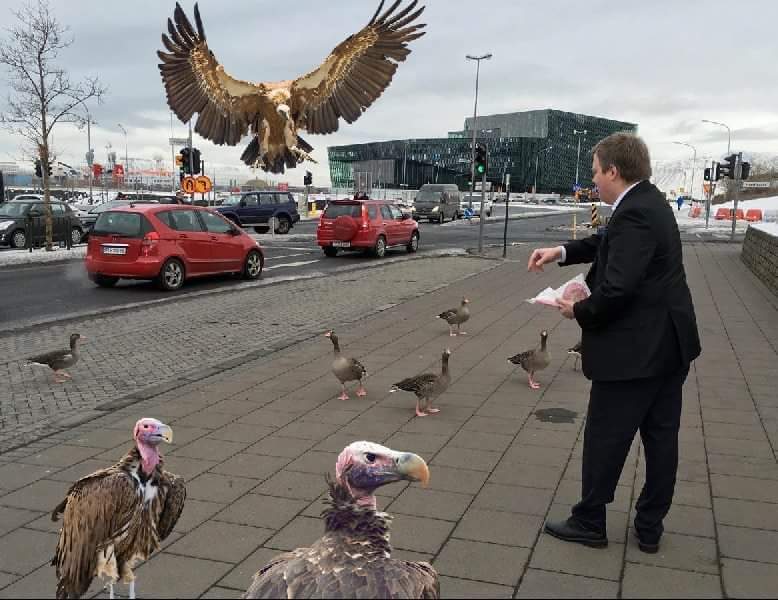 Hmmm. Does that by any chance make him … incompetent?

Whereas the Independence Party, with Bjarni Ben at the helm, remains curiously quiet. So quiet, indeed, that we begin to have creeping doubts. Particularly in light of the fact that BB seemed so very reluctant, a while back, for Icelandic tax authorities to pony up funds for a certain list sold by anonymous hackers and bought by several governments around the world, that would reveal which Icelanders had funds in tax havens. Particularly in light of the fact that he had introduced a bill in parliament that would grant amnesty to tax evaders if they came clean and paid up. After all, the Independence Party is no slouch when it comes to corrupt political practices – you might say they wrote the best-practice manual.

And so, two days ago our suspicions were confirmed. The data from the aforementioned investigations is beginning to trickle in and lo and behold, Bjarni Ben is one of two IP cabinet ministers who has an offshore bank account – the other being Ólöf Nordal, minister of the interior.

Now, if you don’t think this is outrageous enough, consider this: the PP and IP have consistently refused to even discuss the possibility of Iceland joining the European Union and thereby adopting a new currency. (Yes yes I know, EU membership is a bad deal yada yada, I’m not going to get into that here, it’s a whole other discussion.) They have agitated tirelessly for Iceland keeping the króna, extolling its virtues ad nauseum. But the sad fact is that the króna benefits only the elite, and keeps the rest of us in an economic straitjacket. And now we see that this country’s leaders clearly do not have any more faith in the króna economy than we do – in fact they operate with their assets outside the Icelandic economy, in a different currency! They don’t have to live in the lockdown with the rest of us – they can successfully invest and grow their wealth outside of this country. All the while continuing to live here and use the services paid for by the plebs of this country, and hammering on about how wonderful it is that we have the króna.

People, seriously. It’s enough to drive you to distraction. We have corrupt practices by these clowns being exposed daily – in fact it has become so overwhelming that most of us feel completely powerless. And no amount of protesting, no amount of indignation, seem to change anything. But this is big. The vast majority of the Icelandic people have no trust in this government any more. They have a year more in office, and it horrifies me to think what damage they can inflict in that one year. 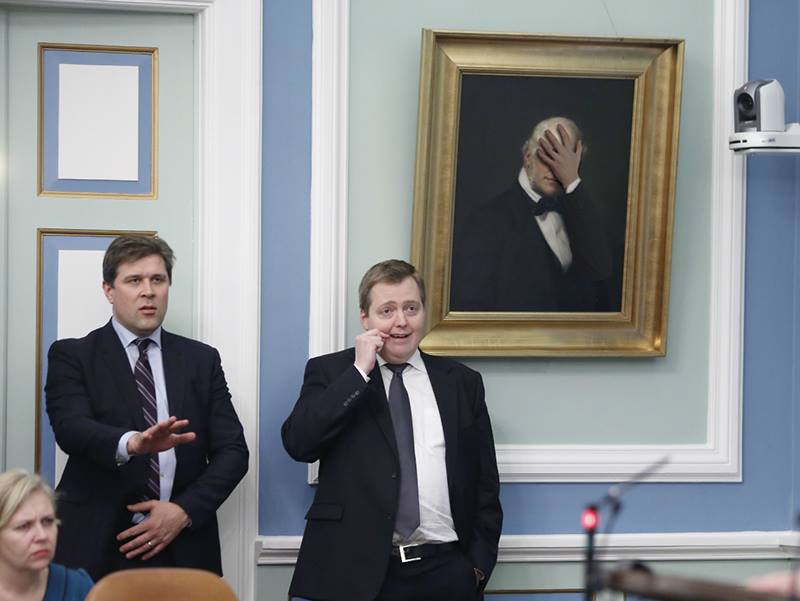 Incidentally, this whole matter is wide-reaching and complex, and here I have tried to give a broad overview. I have not even begun to talk about how the PM refused to speak to the media after the scandal broke, and then hand-picked those media outlets that he knew would not ask any tough questions – including Iceland’s Útvarp Saga radio station, where the Donald Trump-supporters of Iceland hang out. So, feel free to add your thoughts, addendums, offshoots etc. in the comments.

A demonstration is planned for Monday at 5 pm. The outrage is palpable. We shall see what transpires.