A somewhat unexpected and unconventional Christmas story has captivated the minds and hearts of the Icelanders this year.

Just over a week ago, a prisoner escaped from Litla-hraun, this country’s only maximum-security prison [although the “maximum” part is rather open to interpretation, as the convict escaped by crawling under the fence]. Obviously a major search was launched, but after seven consecutive days of searching, there was still no sign of the escapee.

The prisoner in question was in for attempted manslaughter, as he had tried to kill a woman. During the investigation, it transpired that he had got in touch with her and threatened to finish the job, so to speak, so obviously his escape was taken very seriously [a couple of days ago the woman wound up fleeing the country with her children]. Warnings were sent out to the public in which people were told not to try and approach the prisoner, as he was considered dangerous. Meanwhile, his family [his mother and grandmother] very publicly urged him to turn himself in [among other things by writing loving messages on his Facebook wall].

A relentless search for the escapee by both police and rescue teams turned up hardly any clues as to his whereabouts. Litla-hraun is located out in the boonies [in the small town of Eyrarbakki, south Iceland, to be exact], so getting anywhere – like, say, to Reykjavík – is not an easy proposition, unless you have someone pick you up. The guy was said to have few contacts in Iceland [though he is Icelandic, he grew up abroad] and few places to go. It was thought that he was either dead in a ditch somewhere, or that he had broken into one of the many cottages in the area and was staying there. Mind you, he had been in the Austrian army and also the French foreign legion, and had therefore obtained training in surviving in the wild under difficult conditions, so anything was possible.

And of course, in a country as tiny as this one, everybody follows the news, and just about everyone was aware of the situation. 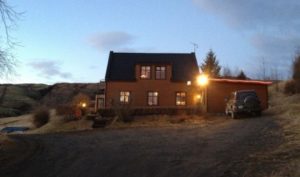 Cut to the night before last – the wee hours of December 24. In a farmhouse in Þjórsárdalur valley, south Iceland, a farmer and his daughter are asleep. Suddenly there is a banging on the outside of the house. The daughter wakes up and goes to the window. There, armed to the teeth, is the escaped convict, announcing that he is ready to turn himself in and asking them to call the police.

So both the farmer and his daughter get up, and start talking to the guy through the kitchen window. They ask him if he needs any warm clothes, and then hand him some soup that they’ve warmed up, plus some hangikjöt [traditional Icelandic smoked lamb, primarily eaten at Christmas]. As he seems quite rational and calm, they ask him if he would be prepared to leave his ammo outside [one rifle with a silencer, four packs of bullets, an axe, and several knives] and come inside the house. He agrees, so they invite him into their solarium where they give him coffee and cake. While they wait for the police to arrive, they talk to him about his future, and whether this isn’t a perfect opportunity to turn his life around. He tells them that he decided to turn himself in for the sake of his family, because he didn’t want them to be worried about him over the holidays. The farmer encourages him to get himself an education while in jail.

About 40 minutes later, the police arrive, and take the escaped convict back to Litla-hraun.

To me, there is something so profoundly lovely [and quite Icelandic] about the farmer and his daughter’s reaction in this situation. Rather than freaking out and barricading themselves in their house – or, worse, getting out a rifle and threatening to shoot the guy [as might easily have happened in some of the countries close to us – we won’t mention any names], they remain decidedly calm and levelheaded, greeting this potential killer with gentleness and humility, even inviting him into their home and sharing their food with him. They approach him first and foremost as a human being who has lost his way, and not as a dangerous threat. They see in him a person who had the potential to make something of his life, irrespective of his former “sins”.

And if that isn’t in the spirit of Christmas, I don’t know what is.