This is what's happening with my new book

In the last while I’ve had a few people ask me what’s going on with my new book – the novel for which I was requesting beta readers a while back.

Well, the writing is done, the beta reading is done, the editing is done, I think we’ve nailed a cover for it [I’m so fortunate to have a graphic designer at my disposal in the form of my supremely talented husband], and now I’m figuring out the best way to get it out there, with respect to method, timing, and so on. 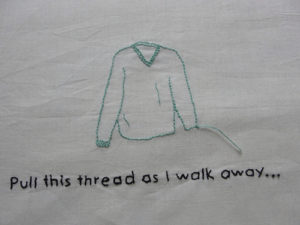 Brief recap: the book is called Unraveled and it’s a novel. In the story, an Icelandic woman named Frida has recently moved back to Iceland with her husband, a British diplomat who has just been made ambassador to Iceland. Their marriage is fraught with tension, and as the book unfolds, various things begin to unravel, not only in their relationship, but also in the society in which they find themselves – Icelandic society during the economic meltdown.

I’m currently taking a course at the university about historical novels and how they depict the lives of regular people experiencing monumental historical events. Of course the events themselves tend to loom large in our consciousness, but often we’re not aware of how they play out in peoples’ daily lives. That, to me, is the real fascination with history, and I’ve just realized that this is something that my novel depicts – even though I didn’t really set out to do so.

I hasten to say that Unraveled is not a historical novel [obviously – since “historical” implies that it takes place many years previously], nor is the meltdown the major focus. To me it’s about people trying to come to grips with their own emotional truths, or running from their own emotional truths, with all the messy feelings and behaviors that this inevitably entails. I was also really interested in exploring some moral/philosophical questions, like: What exactly constitutes betrayal and infidelity in a marriage? Which laws apply – the laws of the church, or the laws of the heart? Are the laws of the church automatically the laws of God, or are the laws of the heart also the laws of God? Does infidelity in a marriage automatically constitute sleeping with someone else, or are there other forms of betrayal that are just as serious?

I finished writing last summer, and then put out that call for beta readers, which was a great move and a great experience. One of the major benefits of that type of crowdsourcing is getting people involved who don’t have a close relationship to you and therefore – presumably – have no problem with telling you exactly what they think. Loads of people got in touch and volunteered [once again: thank you all!] and I wound up picking seven people [… two of whom I never heard from again after they received the manuscript. Maybe they’re still pondering the above questions].

The feedback I got from my most excellent beta readers was invaluable. It’s so great to get an objective perspective when you’ve been immersed in a project so long that you’ve long ceased to even realize you’re in a forest, to say nothing of seeing the trees.

A few points that I found surprising, that on closer examinations are really elementary:

Anyway, this post could run on ad infinitum if I got into that side of the story, so maybe I’d best stop here. But stay tuned, and if you have anything you’d like to ask, you know where the comments are [wink].