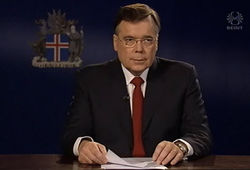 October 6th, wery wery significant day in Icelandic history. Four years ago exactly, Icelanders gathered in front of their screens and watched as then-PM Geir Haarde announced that this country was going to hell in a handbasket, national bankruptcy was imminent, and that we could well be sucked into some dark and horrible vortex along with the banks that were all collapsing, one by one. He ended the address with the now-famous phrase: “God bless Iceland.” The ensuing panic was palpable, we were all in shock, thinking that we would be instantly transported to the third world, and that our future would be made up of some weird apocalyptic universe.

Thankfully those awful visions did not come to pass. However, we did have a bank collapse, a political collapse and a currency collapse, not to mention a moral collapse. People’s assets and property plummeted in value, there were pay cuts across the board, and debts grew exponentially. Inflation shot up, and spending power has decreased massively since 2008, while pay rises have in no way kept up.

There’s a good interview in yesterday’s Fréttatíminn with historian Guðni Th. Jóhannesson and philosopher Eyja Margrét Brynjarsdóttir about what, if anything, has changed in the last four years. Guðni points out the irony about Iceland being hyped up as some kind of economic wunderkind these days: before the collapse, there was all this talk of the Icelandic economic miracle (which turned out to be all just a ruse), and now, again, there is talk of the Icelandic economic miracle. All that hype, meanwhile, seems to come from abroad, whereas here in Iceland, people are somewhat less enthusiastic. He compares it to the situation in the former USSR just before it collapsed, when everyone was shouting about how amazing Gorbachev was, whereas at home people were not quite as thrilled.

In any case, we still have capital controls, and our currency is still unusable. (And please don’t give me the spiel about being able to devalue the krona bla bla bla … sure you can devalue the krona and make all exports out of Iceland super-cheap, but at the same time you devalue our savings here by the same amount. How would YOU feel if the government went into your bank account and took away half of your savings?) No one has yet been brought to account for their role in the economic collapse (NO, Iceland has NOT jailed its bankers, as the popular myth likes to proclaim) and there is still a massive amount of anger around.

All that said, at least we are not living in the third world, and there is a lot to be grateful for. No one died in the collapse. Suicides, in fact, have decreased since 2008. Studies also show that adolescents feel better than they did prior to the collapse, and alcohol, tobacco and drug use among those age groups has decreased substantially.

And on that happy note, I’ll wrap up this blog post that started as a status on Facebook and morphed into something else entirely.